The Shark IQ and Roomba i3+ are the most popular mid-tier robot vacuums—and for good reason! These vacuums have many of the best features of expensive robot vacuums for a fraction of the price.

In this article, I’ll go over the cleaning performance and must-have features of these robot vacuums. This information is everything you need to understand the differences between Shark IQ vs Roomba i3+ and pick the best robot vacuum for your needs. 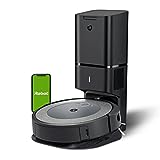 No need to purchase bags.

Scatters some dirt while cleaning.

No need to purchase bags.

Scatters some dirt while cleaning.

Design Differences Between Shark IQ and Roomba i3+

The Roomba i3+ is slightly larger than the Shark IQ, but the difference in diameter is only half an inch. There’s also a 1.5-pound difference. That could be enough to matter if you plan on carrying it up and down stairs to use your Roomba on multiple floors.

Shark IQ or Roomba i3+: Which Cleans Better?

Both machines have a similar dirt capacity, so they’ll be able to cover the same amount of floor space before they need to be emptied. Since they both have self-emptying bins, this is almost a non-issue anyway.

Shark and Roomba both have their own patented brush designs. In both cases, this consists of a three-stage cleaning system:

There are advantages to both of those setups. The Roombas brush is better at cleaning edges. However, the Shark’s slower brush scatters less dirt as it cleans. In the end, this gives a slight advantage to the Roomba unless you have a lot of low furniture that the Roomba can throw dirt under.

For the roller brushes, the Roomba uses iRobot’s patented dual rubberized extracting brushes. The Shark’s single roller brush is also rubberized and has roughly the same advantages and performance of Roomba’s double brushes. 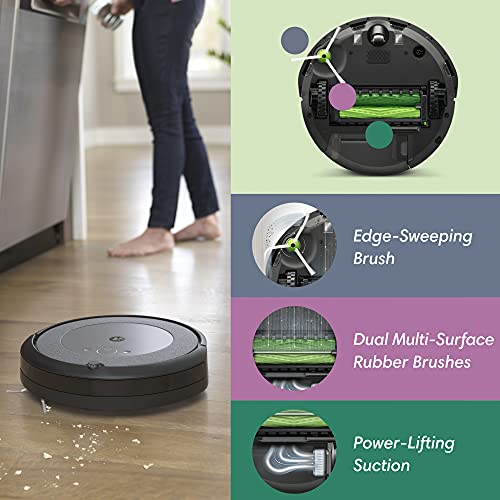 Both machines manage to handle dirt and pet hair with no issue, including removing fur from carpets and preventing those hairs from wrapping around the brushes as they are sucked into the dust cup.

Features of Roomba i3+ and Shark IQ

The Roomba i3 Plus and Shark IQ RV1001AE both come with a self-empty bin. The Shark’s bin has a capacity of 1.8 liters which is on the low end for one of these bins. The Roomba’s 2.5-L bin is a substantial improvement for convenience, but it comes at the cost of a significantly larger base station size.

Shark’s bin is bagless, and the window on the side makes it easy to tell how full the bin is. The lack of bags is a money-saver, but it does release a puff of dust when you empty it. That won’t be ideal for anyone with dust sensitivity.

Roomba’s base contains a self-sealing bag that holds roughly 30 days worth of dirt for a typical household. You can buy the bags for about $5–6 each, which means they’ll only add about $60 to the annual cost of owning the vacuum. For that price, you get a system that keeps the dust out of your face when you empty the bin.

Both vacuums can also be purchased with a standard charging base instead of the self-emptying bin. These cheaper alternatives are sold under the slightly different model numbers of Roomba i3 and Shark IQ RV1000. With the Roomba, you can buy the base first and later purchase the self-empty bin. The Shark, however, has to be purchased with the bin as one cannot be added later.

Neither of these vacuums has a mopping function. If you want a robot mop, consider the Shark RV2001WD AI VACMOP which has both vacuum and mopping functions or the iRobot Braava M6 that mops and can coordinate with your Roomba vacuum.

The Shark IQ use the same basic mapping system as Roomba’s high-end robot models (like the S9+ and i7+). This mapping (Visual Simultaneous Localization and Mapping or VSLAM) allows the Shark to memorize your floor plan for a moderately faster cleaning time and the ability to avoid missing parts of your floor.

The Roomba i3 Plus relies on older mapping technology. Its floor sensors allow it to follow the floor and clean in rows, but it doesn’t remember these maps for future use. Row-by-row cleaning does handle obstacles better than random patterns, which is one of the biggest advantages the i3 has over its predecessors.

In practical terms, its more advanced mapping means that the Shark IQ cleans homes slightly faster than the Roomba i3+. More importantly, The IQ is also less likely to miss spots during a clean.

The Shark has rectangular no-go zones that you can set in the app to prevent your vacuum from going into certain rooms or areas. If you need more granular control, it also comes with magnetic BotBoundary strips that can be used to designate lines that the vacuum shouldn’t cross.

You can’t designate no-go zones in the Roomba i3+ app. Instead, you can purchase virtual walls that act as less intrusive versions of Shark’s boundary strips. The virtual walls also have a halo mode that can keep your Roomba away from a single object without blocking a whole section of the room.

Floor mapping is the biggest difference between the Shark IQ and Roomba i3+ app features.

The Shark IQ can save your floor maps and lets you mark rooms and create no-go zones for the robot. Unfortunately, it can only save one floor plan at a time, unlike the higher-end Roomba models (the i7+ and S9+) which can save up to 10 floor plans. Still, the ability to specify a room for cleaning is a huge plus for the Shark IQ that the i3+ doesn’t have.

The Roomba i3+ doesn’t save maps. You can see the areas it cleaned right afterward, but it won’t save that for future use. This also means there are no options to specify rooms or declare no-go zones for future runs.

Both vacuums will automatically recharge and resume when their batteries are low. However, only the Shark has “Evacuate and resume”, a feature that has your vacuum return to base to empty its dust cup every 30 minutes. That prevents the cup from overfilling and is very convenient for very dirty floors.

The Roomba has an option for multiple cleaning passes, which is incredibly useful if you have heavy dirt buildup or your home needs regular deep cleanings. The Shark IQ has no such function, although you could manually send it around a second time or schedule multiple cleanings per day instead.

You can use both the Roomba i3+ and the Shark IQ with virtually any smart home ecosystem. Both can be controlled via voice command along with in-app commands and schedules.

The Roomba has a slightly longer runtime than the Shark (75 minutes vs 60 minutes). Since the Roomba’s lack of mapping means it takes slightly longer to clean a room, that difference doesn’t mean much.

Roomba’s 90-minute recharge time is a much bigger advantage. If your home is large enough to need multiple recharges, the Roomba will recharge and clean twice in the time it takes for the Shark to go once. That’s a big difference when you’re in a hurry to clean your entire home.

Shark IQ vs Roomba i3+: Which Is the Better Value?

The base prices of the Shark IQ and Roomba i3+ are the same. The replacement bags will run about another $30 per year, which becomes the biggest cost difference between the vacuums.

Both come with essentially the same accessories including the self-empty bin, so they are of roughly equal value. Just pick whichever model has the features, design, and performance that appeal most to you.

These are two of the best mid-range robot vacuums on the market. You won’t find a more affordable robot vacuum with a self-emptying bin and this level of cleaning performance. If you aren’t ready to dish out the money for the premium Roomba s9+, the Shark IQ and Roomba i3+ are ideal alternatives.

The Shark IQ is best if you often need to clean a specific room or if you have a lot of furniture that the vacuum needs to remember and learn to work around. For larger homes, though, the Roomba i3+’s shorter charging time is a huge advantage, as its its larger self-emptying bin. The Roomba i3+ is also better if you have dirt allergies, while the Shark IQ’s bagless tech is cheaper to run.

Since both vacuums have voice support, I suggest getting a simple Alexa setup to go with it. Being able to start or stop your vacuum by voice is pretty great when you make a mess or need to stop Roomba from sucking up something it shouldn’t. If you’re looking for more smart home ideas, be sure to check out my favorite smart plug uses and popular Alexa Fire TV voice commands.