Ecobee’s old room sensors were a crucial part of their thermostat system, offering one of the biggest reasons to try them over competitors like Nest. That’s why it caused quite a stir when Ecobee discontinued the room sensor in favor of the newer smart sensors.

In this article, I’ll go over the key differences between the Ecobee smart sensor vs room sensor, including all the advantages of the newer sensors and the most notable disadvantage. If you’re thinking about upgrading from an old Ecobee system, hopefully, this info will give you the peace of mind you need to take the plunge. 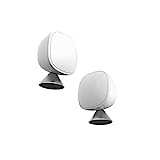 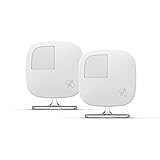 The old room sensors had to be placed within 45 feet of your Ecobee thermostat. That’s not terrible, but the 60-foot range on the smart sensors is a significant improvement.

Keep in mind that these are maximum ranges, assuming no interference. Any physical barriers such as walls, floors, or furniture will cause the effective maximum range to drop substantially. Electronic devices in the 915 MHz range can also cause interference, including some phones, baby monitors, and home security devices.

Ecobee smart sensors are able to detect occupancy much faster than Ecobee room sensors. This lets the thermostat respond faster, and it also allows for more powerful automations when paired with HomeKit, Alexa, or Google Assistant.

Unfortunately, the occupancy sensors don’t reset particularly quickly after they are triggered. Even if no additional motion is detected, they’ll still show occupancy for 30–60 minutes. This is by design, as you don’t want your HVAC to cycle too rapidly, but it means that you won’t be able to replace your other motion sensors with Ecobee’s occupancy sensor anytime soon.

Room sensors were notoriously bad around animals, especially large dogs. Basically, the only way to prevent your pet from triggering the sensor was to point the sensor high enough that it never saw any dogs or cats. Unless you are the proud owner of a short dog that never jumps, you’ve probably already realized why that didn’t work.

When Ecobee came out with the smart sensor, one of its proudest features was “pet immunity.” The claim was that they could distinguish between animals and humans, ensuring that the occupancy sensor would only be triggered by humans. This feature is far from perfect, but it’s a huge step forward.

Ecobee admits that the system isn’t perfect yet, but they do offer a series of suggestions for enhancing its effectiveness. Basically, they want you to keep the sensors mounted away from your pet and avoid pointing them directly at the pet’s favorite hangouts. Even without these tips, the smart sensor does a much better job than the room sensor of distinguishing kid from fur-kid.

Pet immunity is far from the only improvement that Ecobee has made in its sensor’s occupancy detection capabilities. Ecobee room sensors had a reasonably wide horizontal viewing angle, 120 degrees. But their vertical viewing angle was limited to about 25–30 degrees.

The newer Ecobee smart sensors have a 140-degree horizontal viewing angle and a 100-degree vertical viewing angle. They can also detect objects up to 20 feet away. Ecobee never published the detection distance of the old sensors, but they seemed to only work to about 15 feet.

The room sensor used a 240mAH CR2032 battery which could power the sensor for about one year. With the smart sensor, Ecobee switched over to the 1000mAH CR2477 battery.

Even with all the newer features, the four-times-higher capacity of their new batteries has increased the life of the sensor to at least two years. In fact, Ecobee claims that the new batteries should last up to five years.

Both of these batteries are relatively cheap (often $0.50–1.00 each). The newer batteries are about twice as expensive per battery, but their enhanced performance means your annual battery cost is going to be cheaper after the upgrade.

The new smart sensors aren’t all upside. The extra features and bigger battery have to go somewhere. The smart sensor has a depth of about 1.03 inches compared to 0.8 inches for the room sensor. That doesn’t sound like a lot, but it can be noticeable for an object that you want to sit flush against the wall.

The height and width, on the other hand, decreased for the newer sensors. The smart sensor is about 1.58 inches tall by 1.6 inches wide, compared to the 1.7-inch height and width of the room sensor.

The old clip-on bases went away with the room sensor. That’s a good thing because they looked and felt like cheap pieces of plastic. Instead, the smart sensors have a magnetic metal base that feels and looks far more modern. You don’t have to use the stand, but if you do, you’ll be glad you upgraded.

Speaking of design changes, the room sensor looked like a first-generation prototype. It was a square chunk of white plastic in desperate need of some curves. Ecobee apparently agreed because the smart sensor is curvier and much more modern in overall appearance.

This change in design isn’t just aesthetic, as the extra curves help achieve the sensor’s wider viewing angle. It’s always nice when beauty and function can both be served by a single change.

All newer Ecobee setups have smart sensors instead of room sensors, but that’s a good thing. Aside from the extra depth, there really isn’t a downside to this upgrade. If you’re thinking about upgrading an existing system, though, it’s probably not important unless the extra range or the improved occupancy detection and pet immunity are critical factors in your home.

Once you have your smart sensors set up, I’d suggest taking a look at extra use cases for them. Occupancy sensors work great with most of my favorite smart plug ideas, especially for humidifiers and other climate-controlling applications. It’s a quick way to get some smart plug energy savings without needing to buy even more types of sensors for your home.